An inspiration came to Jack Kirby one day. This wasn’t unusual since Jack’s mind was in a constantly creative mode. The moment he and Stan Lee made the decision to move forward with the Asgardian adventures of Thor the Thunder God, all of comicdom stood up and took notice. From the start, as it became the new feature saga in the Journey into Mystery series, the concept was a hit. 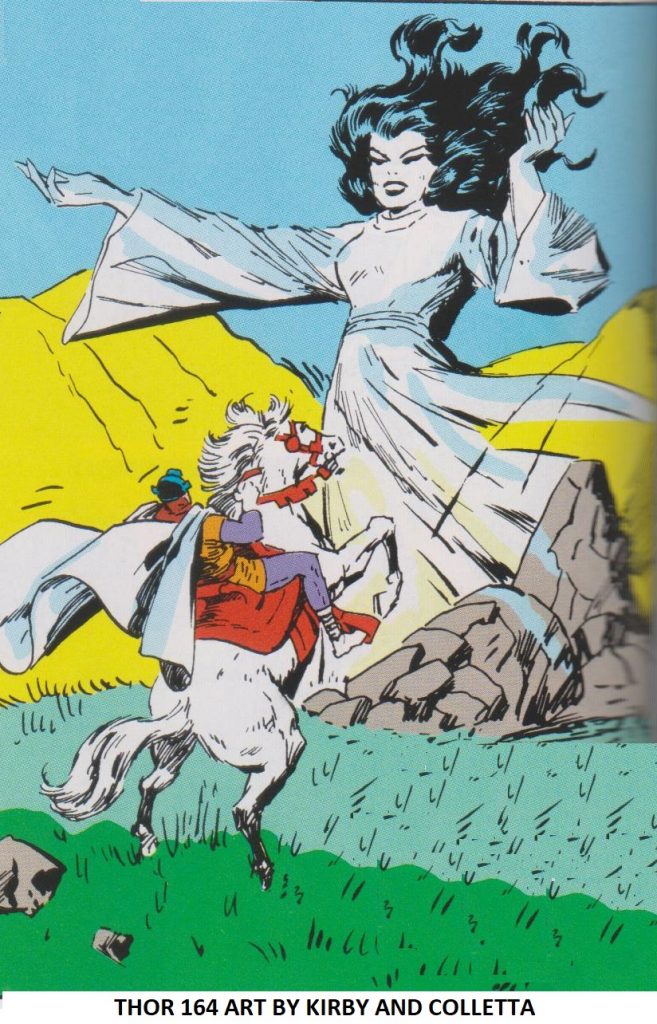 Beginning with issue #83, Journey into Mystery  became Thor’s book. Jack penciled most of the covers and stories, of course, while the finished art was supplied by various inkers such as Joe Sinnott, Dick Ayers, Steve Ditko, Al Hartley, Sol Brodsky, George Ruossos, Chic Stone, Paul Reinman and Don Heck. Using bold, graphic-style inks, the stories were good but the art resembled most of  Marvel’s other books. That is until issue # 106 when Thor was transformed from contemporary to primal. The mythological land of Asgard was born.

Dane Bjorklund: Several of the early THOR and Tales of Asgard issues were inked by a gentleman named Vince Colletta. I think that his name has become linked with his THOR work and the THOR comics that Mr. Colletta inked were among the best. THOR #126 is my favorite comic book cover of all time, drawn by Jack Kirby and Vince Colletta. 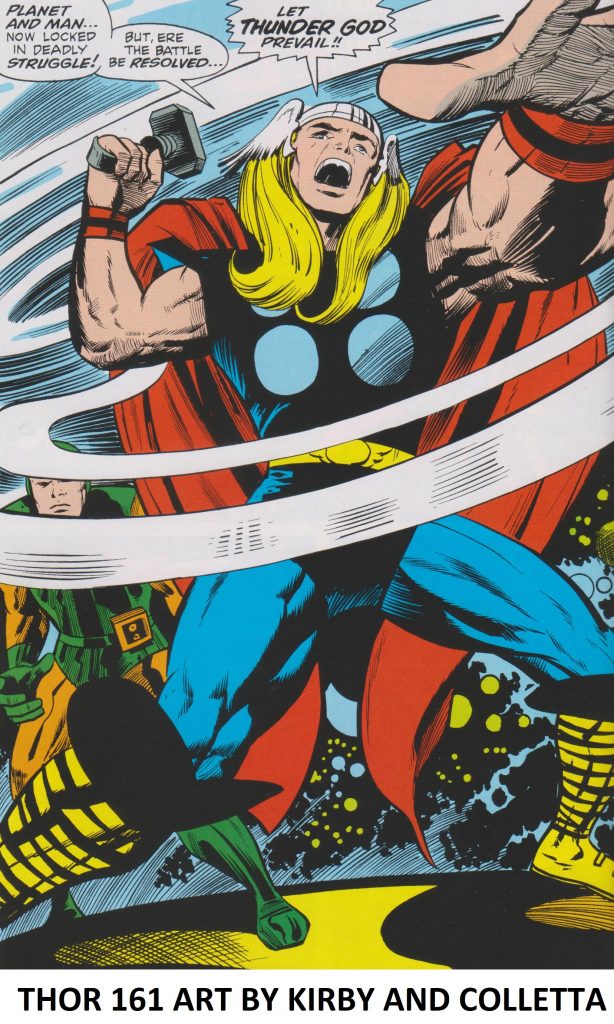 Vince Colletta had always admired the great artist and storyteller Hal Foster.  The delicately rendered Prince Valiant stories gave my father the idea of speaking to Stan and Jack about presenting Thor in a different light. By creating a rough-hewn world more reminiscent of Norse legends, Journey into Mystery’s backup story, Tales of Asgard, gave readers a glimpse into Thor’s world. And right from the first story the controversies began. While Tales of Asgard was hailed as a creative breakthrough by most – I remember the pride that Vinnie felt reading and hearing the accolades – some comic book fans voiced displeasure with the artistic departure.

Rick Young: It amazed me the first time I saw criticism of Vince Colletta’s work. I get that he simplified some of Jack’s backgrounds and I like those intricate details. This panel (This Battleground Earth) has such a rich/finished look that is typical of Kirby & Colletta.

Erik Larsen: In the back issues I recently bought there were rave letters when Vinnie started inking Tales of Asgard.

Erik Larsen: But please–don’t confuse popularity with quality. McDonald’s has served billions of hamburgers, after all.

Pierre Comtois: Overnight it seemed, with Vince Colletta replacing Stone, the regular Thor strip acquired the same timeless, antique feel as Colletta’s work over Kirby in the Tales of Asgard feature.  The inking style changed the whole feel of the book, making even down-to-earth stories such as those featuring the return of the Absorbing Man seem grander than they would’ve been with Stone.  Whether it was the inspiration of Colletta’s inking, a continuation of the kind of stories that they’d been telling in Tales of Asgard or simply the trend that Marvel had been drifting towards through its first two phases, Lee, Kirby and Colletta now launched the Thor strip into an unprecedented series of inter-connected stories whose structure was unlike anything done in comics before.

The fine line work, delicate cross-hatching and detailed delineation of anatomical features were a source of annoyance to readers used to seeing “comic book art.” But by issue #116, Journey into Mystery, Thor and Asgard were all Jack and Vinnie and they became what many fans and professionals alike still feel is the greatest comic-book series ever – Thor.

David Philpott: I enjoyed the Kirby/Colletta Thors as a kid (bought as back issues). And I still enjoy them 25 years later. They are quality entertainment. The Tales of Asgard back ups rocked.

Allen Montgomery: I got the Tales of Asgard hardcover not too long ago. They were definitely playing to the newsprint back in the day. And not just Colletta. All the inkers turned in some pretty rough work. Colletta was the only one that attempted texture of any kind. The rest seemed to favor the “blotch” technique.

George: I don’t think Thor as a book worked until Colletta came on board. As good an inker as Stone was on Kirby he was too nice for the Asgardian world. The only other inker who came close was George Roussos in some of the early “Tales of Asgard”.

Klar Ken T5477:  I like VC’s inking on Thor too. Why not denigrate Chic Stone or Syd Shores as well? Vinnie met his deadlines and his work on the Kirby DC’s was far superior to Royer and D. Bruce Berry.

Mark Engblom: You’re right….Colletta did a pretty good job on the Kirby Thor comics. Just as with Sinnott’s inks, Colletta was able to “soften” the blunt and (occasionally) grotesque extremes of Kirby’s pencils. 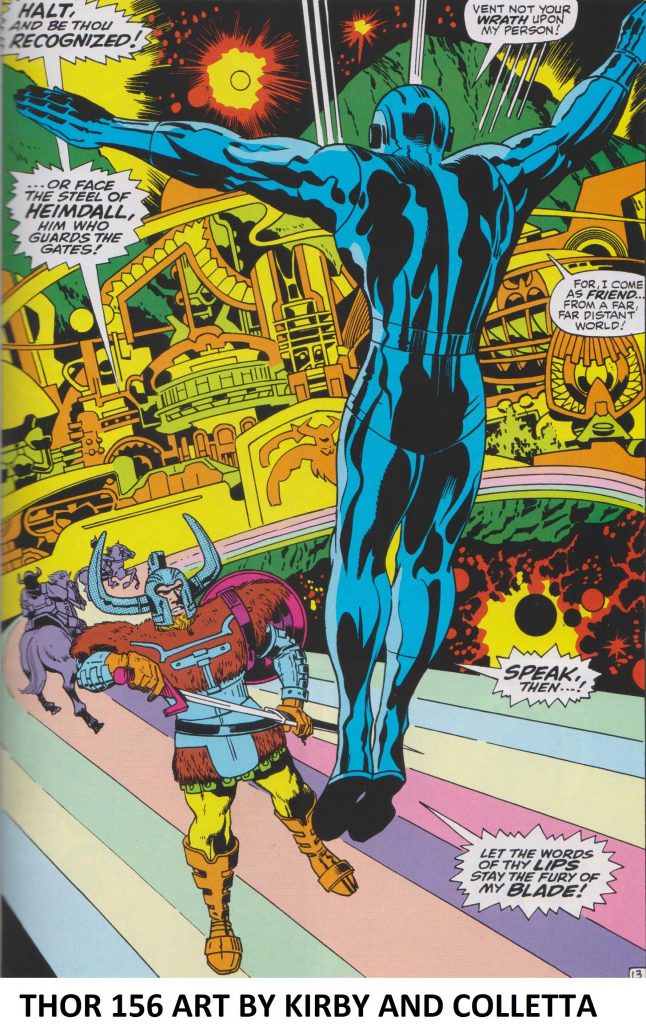 A common criticism of Vince Colletta’s superhero inks has to do with the numerous “scritchy-scratchy” pen lines he used to define musculature. Rather than the quick brush swipes and symmetrical shadow lines used by others, Vinnie preferred the illustrative approach he learned in art school working with oils. He has been unfairly pigeonholed as one-dimensional, however, as the image above clearly proves, Colletta could ink in a bold, graphic style with the best of them.

Tom Lammers: I know a lot of folks don’t like Colletta as an inker, especially over Kirby pencils, but I say as a penciler for this kind of story, he is excellent. He had a real flair for capturing emotion, as the heroine vacillates between sheer joy and dejection, interspersed with uncertainty, pensiveness, and regret.

Jay Kinney: There are some people, me included, who think that the “Tales of Asgard” artwork is the best of any by good old Jack. Vince’s inkings are great and seem to catch the ancient flavor.

Andrew W. Farago: Not to damn these books with faint praise, but Thor’s got to be the best superhero inking of Vince Colletta’s career (Colletta’s romance art has its moments). In black and white, especially in the Tales of Asgard stories, there’s a bit of a Prince Valiant vibe to the artwork which I don’t think would have been there with someone like Joe Sinnott inking the series, which probably would have taken the book in entirely different directions.

Alan Kupperberg (Former Marvel Artist): And then, my last issue 328. Vinnie Colletta finally inks my Thor. I went out with nice inks.

Lyle Tucker: I love those Colletta THOR’s (and especially the TALES OF ASGARDS) and I stopped buying NEW GODS after Royer came aboard, because by that time Kirby needed Vince’s artistic eye to “fix” his increasingly sloppy work – for whatever that’s worth, I thought I’d set the record straight as far as where I stand on the merits of Vince’s inking (and, yes, he DID indeed draw some damn fine romances in the ’50s).”

Norris Burroughs: The amount of inking on this page alone (THOR 142) would overwhelm a less than confident inker, so we must praise Colletta for his sheer tenacity and remember that he was often called on to finish Kirby’s detailed pencils in order to meet a deadline.  Yes, he can be criticized for his faults, but we can also praise him for his strengths and accomplishments.

David J. Bromley: Many thanks for the even approach to a misunderstood & talented inker. Colletta had a ‘fine art’ approach that many cannot understand.

Aaron Noble: It’s in the “anatomy and fine detail” that you appreciate Colletta’s contributions.

jon m: Thor was a good book for Colletta, as opposed to FF which was a horrible match. I actually preferred his inks on the Fourth World books over Royer. Maybe it just eased the transition to DC.

Ian Miller: It’s sad that Colletta gets such a bad rap, because he was capable of some amazing work. If you ever get the chance to see any of the Kirby Thor pages he inked in person you’ll definitely see that he had some great chops. His feathering and fine linework took Kirby’s art in a more refined direction that you never really saw other inkers take advantage of.