It was my privilege to know someone as well-rounded as Vincent Colletta. A true renaissance man, he boldly ventured where other men dared not. His life required constant demonstrations of his skills, his personality and his determination. Possessing a work ethic like no other, Vinnie became the blood, sweat and tears of Marvel Comics. While creators such as Stan Lee, Jack Kirby and Steve Ditko chiseled a magnificent and monumental landscape, it was the likes of Colletta, Verpoorten, Severin, Shooter, Romita and others whose names are remembered by only a few, who carried the load; making sure that Marvel’s comic books got to the newsstands on time – every time. What began as a labor of love for Vinnie, became a struggle for survival. Throughout his life, he was punching above his weight which translated into his taking on too much work. Yet, despite all of the time crunches, the four AM drives into Manhattan, the countless nights spent catching a few hours sleep on the office couch after inking rush jobs, Colletta managed to produce some indelible work.

Jack Kirby took action-art to a whole new level. His exciting layouts as well as the characters he helped to create, were primarily why the public stood up and took notice of what Marvel was doing. Jack became God-like himself to a throng of adoring fans who discussed him reverently and defended “The King” from anyone or anything that wronged him. Even a perceived slight would incite swift and hateful rebukes from Kirby’s ardent fans.

Vince Colletta was a frequent collaborator. Having cut his teeth as a portrait and mural artist before discovering comics, he gravitated toward romance stories and instantly became the most sought-after artist in the genre. It wasn’t easy – attempting to transfer his oil painting sensibilities to a medium as different as pencils and ink on paper. From the start, Vinnie attempted to depict comic book characters as realistically close to human beings as he had the tools and ability to craft with his paints. Yet, as astonishing as his efforts were, the reality of the business soon afterward became clearly defined. The more work you produce, the more money you earn. The days of creating museum-quality comic book art were over for him.

Getting back to Kirby and Colletta…Once superheroes became the prevalent variety of art work available, Vince found work inking the fiery action stories at Marvel. While his inks can seen on every Marvel character; and in collaboration with every penciler in the place, what became his defining work was Thor. Perhaps inspired by the Prince Valiant comic strip created by Hal Foster, Vinnie sketched a few pages of how he thought the character should look. Stan Lee was impressed enough to suggest that Colletta ink the backup stories in the Thor books called Tales of Asgard. Those collaborations between Lee, Kirby and Colletta would go on to define the appearance of the characters and their environment forever. 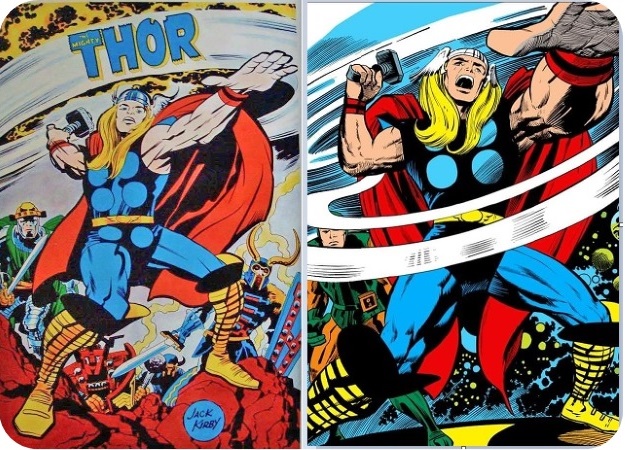 Much has been made of how Colletta “changed” Kirby’s pencils. Many of Jack’s more enthusiastic followers claim that Vince’s inking “diminished” the energy portrayed in the layouts. Jack Kirby is purported to have penciled AND inked the image on the left showing Thor swinging his hammer. Most of his fans – going by what appears online in debates that will seemingly never end – prefer unadulterated Jack. If comic books could be reproduced from pencils, they would prefer that no inker ever touched his art. But the inks were necessary for the images to be replicated by printing presses. Compare the side-by-side images of Thor…All Kirby on the left and Kirby–Colletta on the right. Is there more vigor in the Kirby image? Does Colletta’s inking reduce the dynamism of the picture?

One comic book reader wrote: “Granted, Colletta’s inks do not work for every penciler, but anyone who doesn’t recognize the majesty of how Colletta inked Kirby on THOR simply does not have an eye for mythology.  Thor and the Asgardian gods have never looked more massive and imposing as when Colletta inked them. Kirby’s art is easily gold all by itself, but when it came to rendering the gods, Colletta made them hulking and sinewy and savage-looking, their bodily frames monstrous, beastly and hirsute.”

And, another comic-book reader wrote: “I am an artist and Colletta is like bad music. He can’t draw faces, and for all his “fine lines” important details in the pencils disappear with his inks. I am sick to death of seeing this ongoing representation continuously being posted- it’s not the Kirby I fell in love with, so many, many examples of inkers who did right by him, including himself. Because I don’t like one of them devalues my opinion? Colletta is no Hal Foster, no Alex Raymond, no Caniff or Kubert. Colletta is not suitable for or deserving of inking Jack Kirby’s pencils.”