John Buscema and Vince Colletta created mayhem with this splash page from Avengers 44. The panel depicts terrified men and women who have realized that they are about to be engulfed by a giant tidal wave. One of the horrified women exclaims with disbelief, “BUT, WE’RE MILES FROM THE SEA! IT…IT ISN’T POSSIBLE!.!”

The enormous tidal wave has swept boats, cars and other debris toward the shocked onlookers. Their fear is palpable. This is a perfect storm of the penciler and inker’s visions flowing together. Whether Buscema intended the focus to be on the approaching tsunami or the stunned foreground figures, Colletta cemented the decision to put the spotlight on both by daringly inking the foreground every bit as boldly as the stormy sky and onrushing sea. 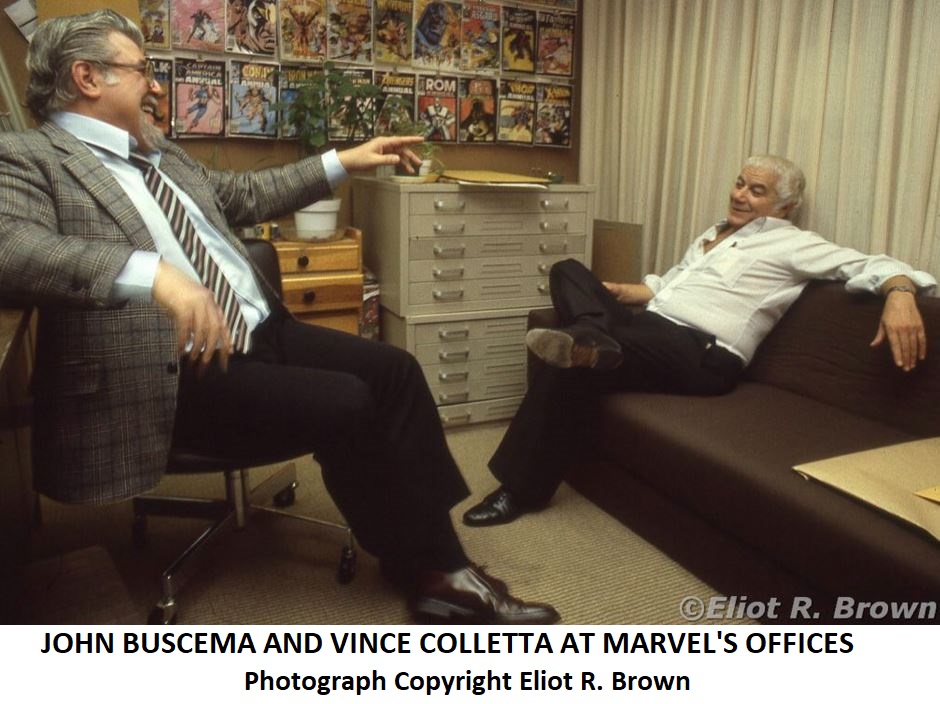 This excellent photograph, taken by The Unofficial Archivist of the Marvel Bullpen, Eliot R. Brown, shows John Buscema and Vince Colletta enjoying a lighter moment at Marvel’s offices. Both men were known for having genial personalities. If a cordial relationship often results in superior artwork, this photograph and example of their collaboration attests to that.

M.J. Downing: I still bought and read comics, but that was mostly to do “swipes” I’d take from them as I learned to draw from Jack Kirby, John Buscema, and Vince Colletta.

Pierre Comtois: Matched this issue (Avengers 44) with artist John Buscema (who himself was in a transitory phase between comics art traditionalism and the new, more action-oriented Marvel style), Colletta’s fine line, detailed inking gives the artist’s work a sheen of sophistication that’s real easy on the eyes. From the first page to a gorgeous two-page sequence featuring the Guardian’s fight with counterpart Captain America (where Buscema shows off his mastery of the human from in no uncertain terms!) …. Colletta showed he still had it. It was a skill that would often be called upon in the twilight years to firm up the doubtful work of artists a good deal less gifted than Buscema.”