I suppose I first met Vinnie nearly forty years ago. And he was a friend. He invariably greeted me with his deep, gravelly, laconic voice, saying, “Hallo, handsome.” Probably because he couldn’t remember my name.

I was first consciously exposed to his work when he began to ink Jack Kirby’s THOR in Journey Into Mystery. If my memory serves, Vinnie followed Frank Giacoia as inker on the main feature. That is a very tough act to follow. In my opinion, Frank Giacoia (another very dear friend) was as good an inker as there ever was in comics. And I thought he always made Kirby look sensational. That being said, It wasn’t as though I hadn’t had a chance to warm up to Vinnie’s inking on Tales of Asgard. 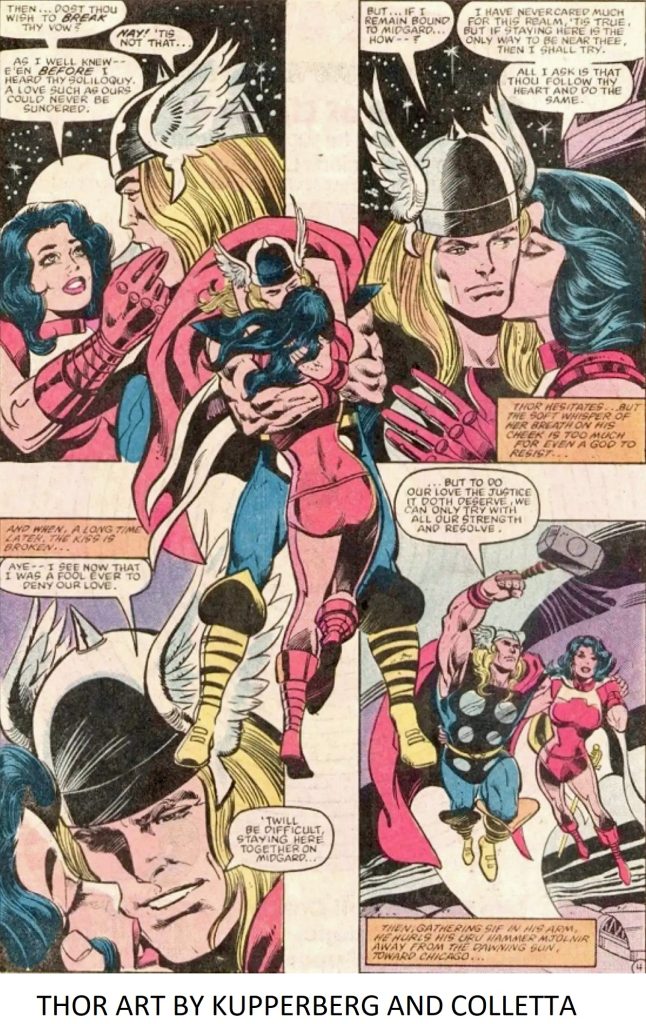 Vinnie was a good guy and he didn’t have to cut throats to get his assignments. Editors knew what they were getting when they hired Vin. They were getting their job done. Someone or several of the creators involved in producing a book hadn’t acted professionally, and the editor had to call in the pro’s pro to save the book’s deadline. Vincent Colletta — ta DA!

Vince inked my first professional page in 1971 for National’s Young Romance. “Page Peterson’s Do’s & Don’ts of Dating.” Editor Dorothy Woolfolk bashed out a typewritten, one page script for me as I hovered over her shoulder. 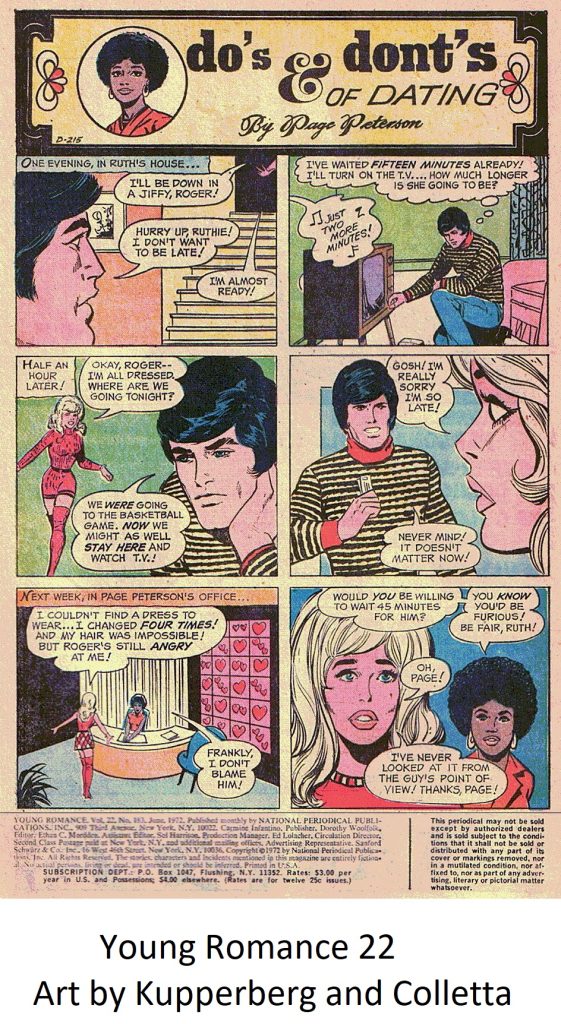 Then as now, I was a fan of Neal Adams’ work for National. And he was in the office every day, as was I. And I used to tease Neal about the, “But Bork Can HURT You!” Brave & Bold issue that Vinnie had inked over Neal (and that Neal had extensively re-inked over).

As early as 1971 Neal was saying that Vinnie was the worst inker in the world. But that’s just Neal being gratuitously cruel. Neal prides himself on knowing exactly where to put the “needle” in, and he was literally trying to hurt Vinnie. The animus that came to a head in the whole Jeanette/Neal/Vinnie incident had been engendered much earlier.

I’ve been inked by the best! Neal Adams, Dick Giordano, Wallace Wood, Joe Sinnott, Rudy Nebres, Frank Giacoia, Frank Springer, Jack Abel, Jim Mooney, Jim Fern and Gray Morrow. And these professional, super artists made me look like a pro as well. But those occasions were too few and too far in between.

I was more often inked by guys like Mike Esposito, John Tartaglione, Joe Giella, Chic Stone, Pablos Marcos and others that made my work look just like it was; adequate. 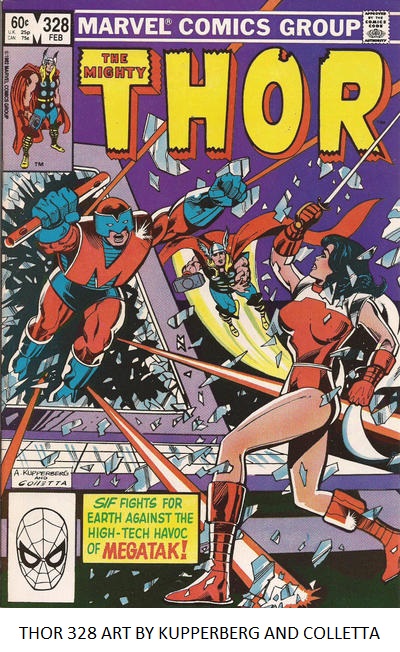 Then there was a third group of inkers that I’d get. These chaps shall remain nameless. But these guys made my stuff look like crap.

So, when I’d get Vinnie on a job, I’d at least know I’d come off looking like a pro. During my run pencilling Thor, I often begged the editor to put Vinnie on my pencils. Finally, for my very last issue (just before Simonson took it over), Vinnie did the inks. My Thor finally looked like THE Thor!

When I was a kid, an unsophisticated snot with more opinions than ability, I could not see the merits of a lot of fine artists. I remember, in particular, one autumn morning in 1971, Jack Abel and I were talking in National’s production room. And I made a stupid, denigrating crack about Ross Andru’s abilities. And Jack gave me a queer, puzzled look, as though I had just spoken an unknown language to him. And Jack said, “Stupid kid. Ross Andru is a master!” 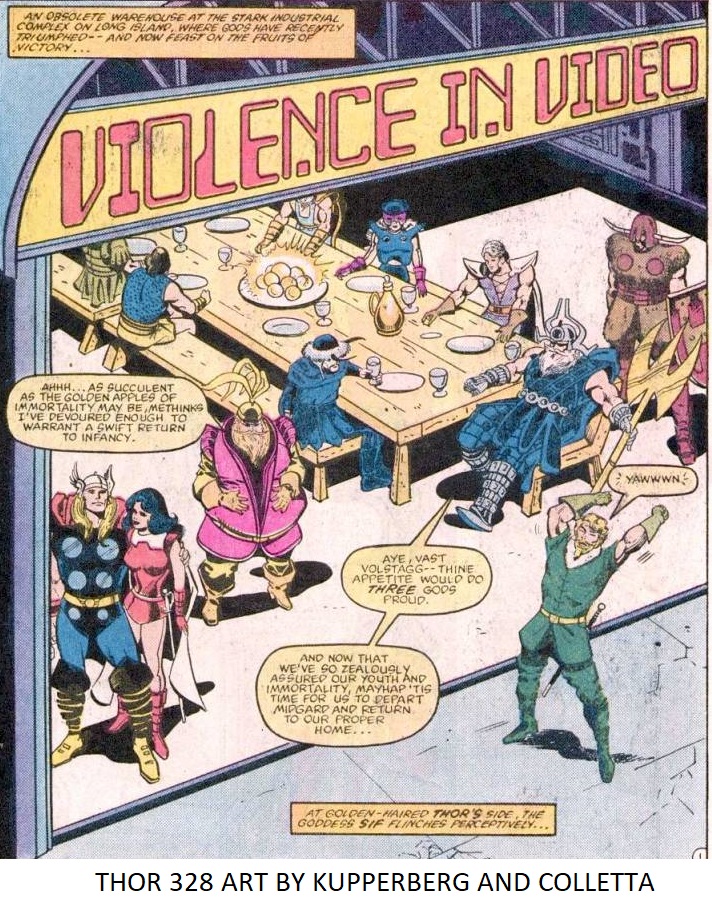 Because I did not know enough to be able to see past a few artistic quirks which Ross possessed and appreciate what he was actually doing. A lot of work horses were like that. Like Vinnie. The guys who sat behind their boards for twenty, thirty — fifty years, turning out good, solid comic book pages that we loved so much. These are the guys that MADE the business. Vinnie’s work may have hurt the tender sensibilities (sometimes justifiably) of some artists and fans, but he did no harm to the business.
In my opinion, guys like Neal don’t live in the real world. Neal lives in the cult of Adamsland. He is surrounded by sycophants and ass-kissers, 24/7. But Neal didn’t make the business. Guys like Vinnie did. Neal was a snob who dropped into the business for a few years and shook things up. Until he decided that the business didn’t deserve him any more.

But Adams purposefully started the process of elevating comic books. And that elevation has continued unto this day.

And you know what? Comics have been elevated. Elevated right out of their shoes. What had been a ubiquitous item, an inexpensive mass medium has lost its mass. They have become an over priced, over-produced niche item for dedicated hobbyists, a small, insular circle of snobs.

Vince, you was a Prince. 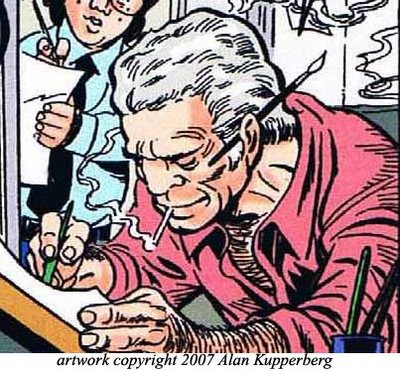 I just finished the book. You left me in tears. You’re right, “nothing was impossible,” to Vinnie. God Rest His Soul. I will e-mail within a day or two with my thoughts. Thanks again.

Alan Kupperberg passed away in 2015. His name is memorialized in the dedication page of my book. Alan was a special soul who was loved by all.